Notice: Trying to get property 'post_excerpt' of non-object in /home/www/snack-dev.co.uk/www/wbn.snack-dev.co.uk/wp-content/themes/world-boxing-news/single.php on line 88

Australian hardman Anthony Mundine was battered within the opening round for the second time in three fights and clearly now should hang up his gloves.

‘The Man’ didn’t look as though he was capable of fending off Michael Zerafa following an early onslaught.

Reporter Eric Armit picks up the story from down under.

Zerafa blitzes Mundine inside the first round. Mundine was coming forward when Zerafa suddenly connected with a left which staggered Mundine.

Zerafa then cut loose with a series of rights to the head that sent Mundine into the ropes and then down on his hands and knees.

Mundine looked more angry than hurt and was up quickly. 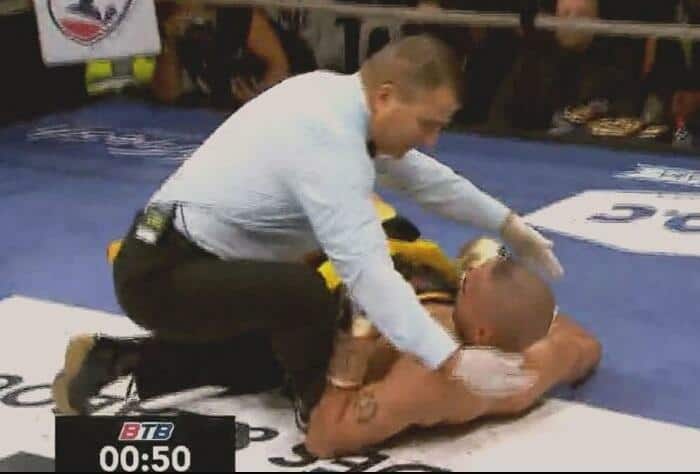 Zerafa came forward looking for an opening and then connected with a heavy right to the head that sent Mundine crashing to the canvas, and immediately the fight was waved over.

A huge win for Zerafa who lost to Kell Brook and won then lost in fights with Jeff Horn.

He immediately called out Tim Tszyu. Mundine had already said this was his last fight no matter what the result and conformed his retirement at 45. He has been a hugely successful and hugely controversial figure in Australian boxing with his strong support of the rights of his fellow indigenous people.

Peralta was more measured in his approach in this one outboxing the slower Balmaceda scoring with thudding jabs and rights to the head. In the sixth, a left hook sent Balmaceda stumbling into the ropes, and he went down under a succession of punches. He managed to get up and carry on until a right to the temple made his legs tremble, and he went dropped to one knee.

The referee completed the eight count and as Balmaceda got up his corner chucked in the towel.

An Elite level amateur Peralta, 29, is aiming to qualify for the Tokyo Olympics. Balmaceda, 36, now has balance in his record with 13 wins by KO/TKO and 13 Losses by KO/TKO.

Rojas collects the vacant WBA Fedebol title on a majority decision after a war between two southpaws.

It was Leiva who came out on top in the first three rounds, but that changed when a solid right to the body in the fourth saw Leiva down in agony.

He made it to his feet and survived the round but that knockdown cost him the fight.

They knocked lumps off each other for the remaining rounds of nonstop action. Rojas getting the decision.

Leiva, 26, unranked was in his first ten round fight and deserved a draw here.